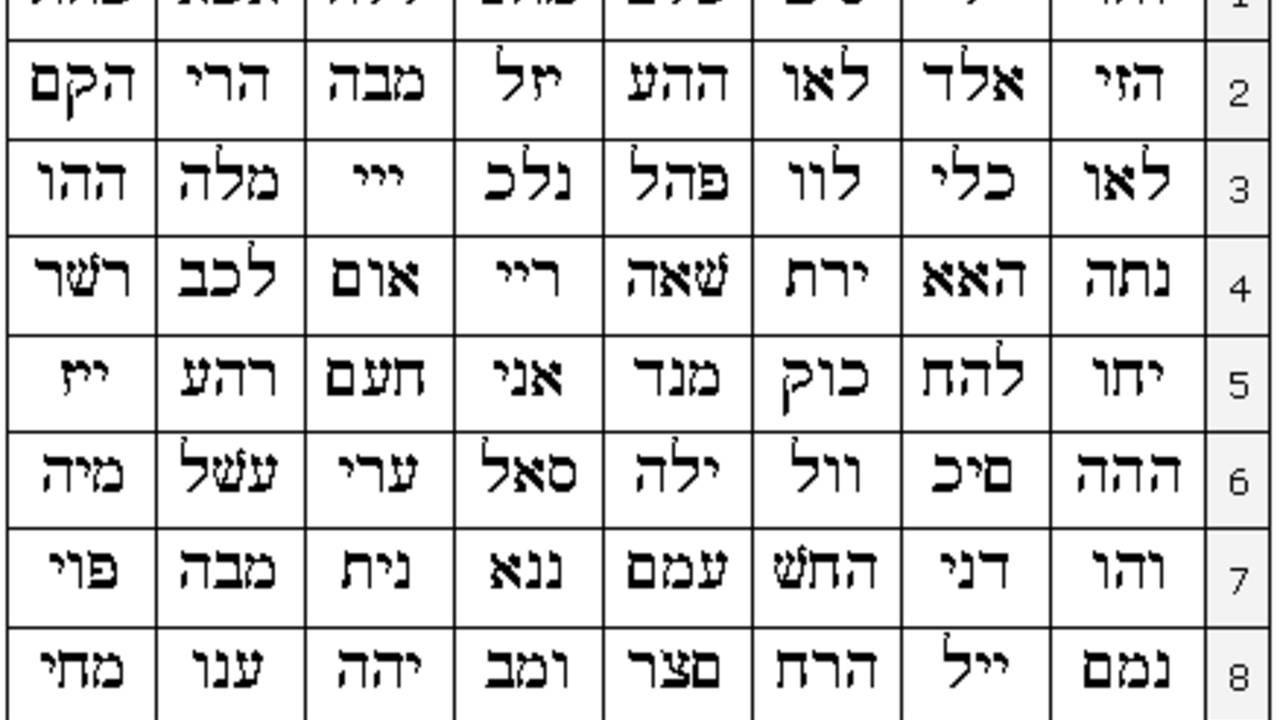 The permutations of the 72 Letters are found in both Talmudic as well as Kabbalistic texts.

Commentators say (Ba’al Haturim) that the name that was inside of the Choshen- חושן, the breastplate of the High Priest (called Orim V’tumim) was the 72 Letter Name combination.

The High Priest also had 72 bells studded on the bottom of his cloak called the Me’il- מעיל. We will soon see the connection of 72 with the priesthood and the side of Chesed - Divine kindness.

In the Machzor (the prayer book) of the High Holidays we find the words u’bechen- ובכן repeating it self. The Kabbalists teach that the numerology of this word is 72.

Like keys, there are many word combinations throughout the Siddur that have the specific names of the 72 Letters.

As discussed in our 2nd class on the Divine names that these 72 combinations are different than the name Av- עב which which has the hidden value of Yud and stems from the above the world of Atzilut.

These name come from the world of Beriyah and manifest Divine kindness and mercy into creation.

The 72 Letter Names are rooted in the name Av (discussed in Divine Names #2) which has the hidden value and numerology of 72. We discussed that this lofty name primarily shines in the world of Emanation- Atzilut.

The 72 Letter names are a continuation of this Divine light within creation- Beriyah. As we know creation really starts in the world of Beriyah, whereas Atzilut is pre-creation.

The name Av is within Chochma- Divine wisdom or intelligence and the 72 Letter Names are from Chesed.

The numerology of Chesed חסד is 72.

We know that both Chochma and Chesed come from the “right column” of the Sefirotic tree. It says that “G-d created the world with Chesed”. In other words, the Divine desire to create and give comes from the side of Chesed. This will or desire came from the Divine intelligence Chochma. Both are on the right side, connoting their connection.

This also relates to the Kohanim- the Priesthood. There is the High Priest and then the regular Priests- Kohanim.

So we find that there is the connection of these 2 names as a father and a child.

To be more accurate, the 72 Letter Names are a combination of the 3 columns of Chesed, Gevurah and Tifferet. Nevertheless, they are essentially connected to Chesed the Divine attribute of mercy and kindness.

In the story of the Exodus, as the Egyptians were chasing the Israelites, Moses is instructed to “go forward” into the raging waters of the Sea of Reeds.

The Zohar says that the 72 Letter Permutation of the Divine names were enjoined to  defy the laws of nature and split the Sea.

The three consecutive verses from Exodus 14:19-21 each contain 72 letters, an obviously rare phenomenon.

The letters of these three verses can be arranged as 72 triplets of letters. But we are taught in Kabbalah that if we reverse the order of the letters in the middle set, the 72 triplets become 72 "names" of G‑d.

"And the angel of G‑d who had been going ahead of the camp of Israel now moved and went behind them, and the pillar of cloud went from in front of them and stood behind them. Thus [the pillar of cloud] came between the camp of Egypt and the camp of Israel, making it cloud and darkness [to the Egyptians], but it gave light by night [to the Jews], so that the one came not near the other all the night. Then Moses stretched out his hand over the sea, and G‑d drove the sea back with a strong east wind all that night, and made the sea dry land; thus the waters were divided." (Ex. 14:14)

In Hebrew, these three verses each contain 72 letters. In the Zohar (II:51b) it is stated that these three verses refer in sequence to the divine attributes of Chesed, Gevura, and Tiferet. The harmonious blending of these three principle emotive attributes forms the basic paradigm of how G‑d relates to the world. Thus, they together form a composite name of G‑d, since a name is a means by which one is made known to others, i.e. manifests his attributes.

The fact that each verse contains 72 letters means that they can be aligned in parallel, forming 72 triplets of letters. In this configuration, the Zohar states, the first verse is to be written in its proper order, since it represents G‑d's loving-kindness, or a direct revelation of G‑d's goodness. The second verse is to be written in reverse order, from the last letter to the first, since it represents G‑d's severity, which is an indirect revelation of His goodness. Although Tiferet is a blend of both Chesed and Gevurah, the third verse is not to be written half in the proper order and half in reverse order, as one might expect. There are two reasons for this: in Tiferet, Chesed dominates over Gevurah, and as the ideal blend of Chesed and Gevurah, Tiferet is a direct revelation of G‑d's goodness and glory rather than an indirect one.

The Ramak writes (Zohar commentary to Song of Songs) that the 72 Letter Names come from the Y and the Hey of G-d’s holy name. As they descend down from Chochma and Bina (the Yud and Hey of G-d’s name) there are 9 expansive levels of the fixings of the beard. These 9 levels are represented by the rows of 8 of the 72 Letter Names.

This level is connected to “Rav Chesed” of the “13 Atritbutes of Mercy”. Regular Chesed is finite and if someone disrespects us more than 3 times we don't want to deal with them. Rav- or great Chesed is a level of kindness that surpasses the actions of the other, it rather stems from an infinite innate mercy.

The Ramak further writes that the names are divided into 2 parts of 36, staring with the name והו and the name אני. These 2 Divine names combine Tifferet והו and Malchut אני.

By the Song of the Sea the Jewish people sang “this is my G-d and I will exalt him, the G-d of my father and I will praise him” the word exalted in Hebrew is אנוהו anvehu. The commentators say it stands for the two names אני והו

The Kabbalists say that this is the deeper interpretation of the following Mishnah in Tractate Succah:  “How is the mitzvah of the willow [branches] done? …Every day they would circle the altar one time and say, "We beseech you Hashem, redeem us, please; we beseech you Hashem, bring prosperity, please." Rabbi Yehudah says: they would say, "Ani vaho,  אני והו bring redemption, please." And on that particular day (i.e. the seventh days of willow ritual), they would circle the altar seven times”.

From our "Divine Names" Series. Log in for more of the specific spiritual energies of each Name.