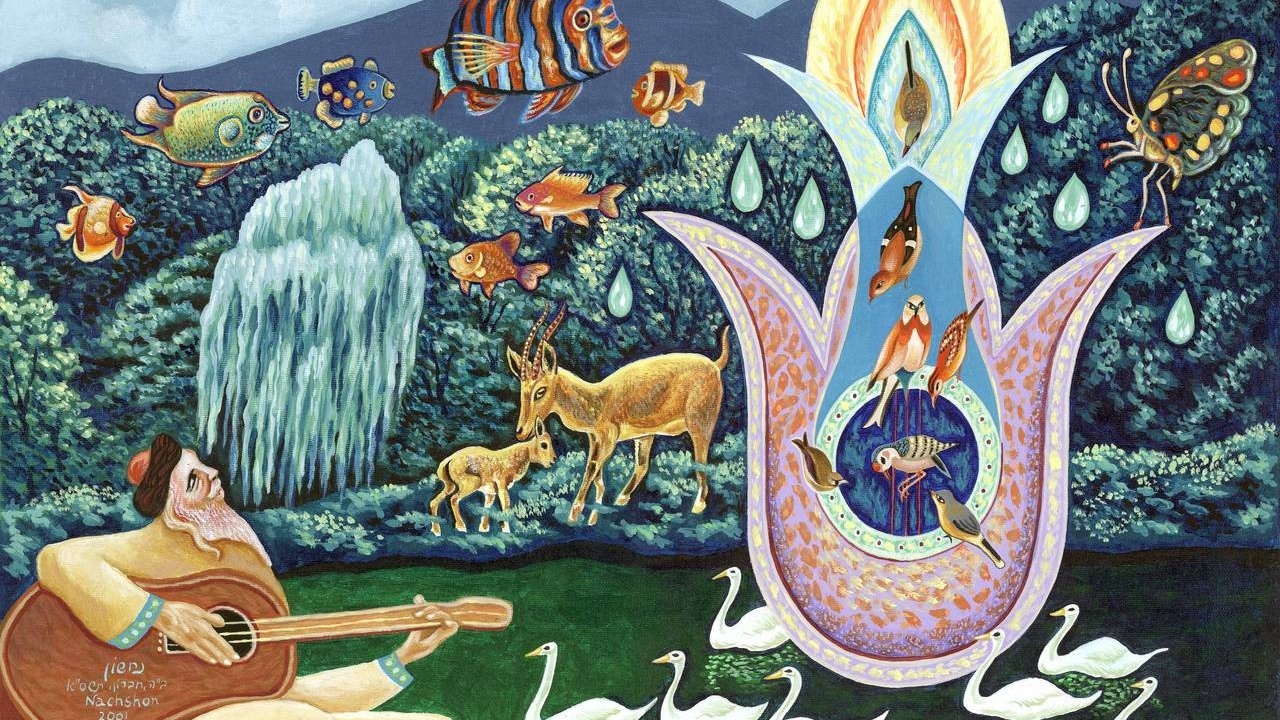 There was a certain king who thought to himself: "Who in the world has fewer worries than me? I have everything good: I am the king and the ruler."

He decided to investigate if this was true. He went out at night and stood behind each house to hear what people were talking about. All he heard was each person's worries. One had problems in his shop. At a different house, he heard someone talking about a problem that needed government assistance. Each and everyone had his own worries.

One night the king saw a very low house. It was like a cellar built half underground with windows at ground level. The roof was broken and sagging. There the king saw a man sitting playing his fiddle. The king had to listen very carefully just to hear the music. The man was very happy. He had a jug of wine and various foods in front of him, and he was very happy. He was full of joy, with no worries whatever.

The king (who was in disguise) went into the house and asked the man how he was doing. The man invited the stranger to sit down, and the king saw the jug of wine and the various foods, and how the man was simply full of joy. He served his guest a drink and drank a toast to the king. Out of affection for this man, the king also drank. Afterward he lay down to sleep, and he could see that the man was completely happy with no worries at all.

In the morning the king rose and so did the man. He accompanied the king out of the house.

"From where do you get all this?" asked the king.

"I know how to repair things," replied the man. "I can repair anything that is broken. I am not able to make anything from scratch, but if something gets broken I can repair it. Each morning I go out and repair a few things. Then, when I've earned five or six shillings, I purchase all this food and drink for myself.

When the king heard this, he said to himself: "I'm going to spoil it for him."

The king went back to the palace, took off his disguise, and issued a decree forbidding anyone who had something in need of repair from giving it to somebody else to repair. Either he would have to repair it himself or buy a new one.

That morning the man went out looking for people with things in need of repair, but they told him the king had decreed that it was forbidden to give anything to someone else to repair. The man was very upset about this, but he had trust in God.

As he was walking, he noticed a householder chopping wood.

"Why do you have to chop the wood?" he asked. "Is that fitting for someone of your status?"

"I tried to find someone to chop wood for me," replied the householder, "but I couldn't find anyone, so I was forced to chop it myself."

He chopped the wood, and the householder paid him a shilling. The man saw that this was a good way to earn money and he went to chop more wood, until he had earned six shillings. He again bought his entire meal - and it really was a meal - and he was very happy.

That night the king again peered in through the window of the man's house and saw him sitting there with his food and drink before him in a very happy mood. The king went into the house and, as on the previous night, he slept there. In the morning the man arose and accompanied the king out.

"From where do you get this?" asked the king. "To buy this you need money!"

"I used to repair anything that was broken, " replied the man. "But the king passed a decree prohibiting giving anything out to someone else for repair. So I chopped wood until I earned enough money for this."

The king left him and issued a decree that nobody must give their wood to anyone else to chop.

When the man approached someone offering to chop his wood, the person told him that the king had issued a decree not to give anybody wood to chop. The man was very upset about this because he had no money. But he had trust in God. As he was walking, he noticed someone cleaning out a stable.

"Is it fitting for you to have to clean out this stable?" he asked.

"I looked for someone to clean it out but I couldn't find anyone, so I have to do it myself."

He set to work and cleaned out the whole stable, and the owner gave him two shillings. He went and cleaned more stables until he had earned six shillings. Again he bought a whole feast and went home. The meal was a meal, and he was very happy.

Again the king came to look, and once again saw that everything was as it had been before. The king went inside and stayed the night. In the morning the man accompanied the king out. The king asked him how he had managed, and he explained.

The king issued a decree making it forbidden to employ anyone else to clean out one's stable. That morning the man went in search of stables to clean, but people told him that the king had passed a decree forbidding this.

The man went to the king's recruiting officer to sign up as a soldier in the army. Some soldiers are forcibly conscripted for army service, but others are hired soldiers who serve for pay.

Towards evening, after he had completed all his duties, he threw off his uniform and went to buy his whole meal - and the meal was a meal! He went home and he was very happy. Again the king went to look and saw that everything was ready in front of him and that he was very happy. The king went into the man's house and lay down. In the morning he asked him how he had managed, and the man told him what he had done.

"But I made it a condition with you to pay me every day," the man protested.

"The king has decreed not to pay anyone today," replied the recruiting officer. All the man's pleas were of no avail.

"I will be happy to pay you tomorrow for two days," said the officer, "but today it is impossible to pay."

What did the man do? He broke off the blade of his sword from its handle, replacing it with a piece of wood. When the sword was in its sheath this was not in the least visible from the outside. The man pawned the blade of the sword. With the money, he received he bought the whole meal - and the meal was a meal!

The king arrived and saw that the man was completely happy, as before. Again the king entered his house and lay down. He asked him how he had managed, and the man told him the whole story - how he had been forced to break the blade of the sword from the handle, and how he had pawned it in order to buy what he needed for the meal.

"And afterward, when I receive the payment for that day, I will redeem the blade and repair the sword. Nobody will be able to see a thing because I can repair anything that is broken, so there will be no loss to the king.

The king went to his palace and called the recruiting officer. He told him that a certain person had been condemned to death. He instructed the officer to call the particular soldier he had hired and to order him - and only him - to cut off the condemned man's head.

The officer summoned the man, who came before the king (now dressed in his royal clothes). The king gave instructions for all his ministers to assemble in order to witness this comic spectacle exposing a man who had stuck a piece of wood in his sword in place of the blade. The man came before the king and fell at his feet.

"My lord the king, why have I been summoned?" he asked.

"In order to cut off this condemned criminal's head," replied the king.

The man pleaded that he had never in his life shed blood. He begged the king to call someone else for this.

The king answered that he and nobody else was obliged to kill the man.

The king replied that there was no shadow of a doubt that the prisoner deserved to die. "And you and nobody else must execute him."

The man saw that he could not prevail over the king, so he turned to God and said:

"Eternal God: Never in my life have I shed blood. If this man is not guilty, let the blade of my sword turn into wood!"

He took hold of the sword and drew it from the sheath, and everybody saw that it was made of wood. Everybody laughed heartily, and the king saw that he was an excellent man and sent him off in peace.