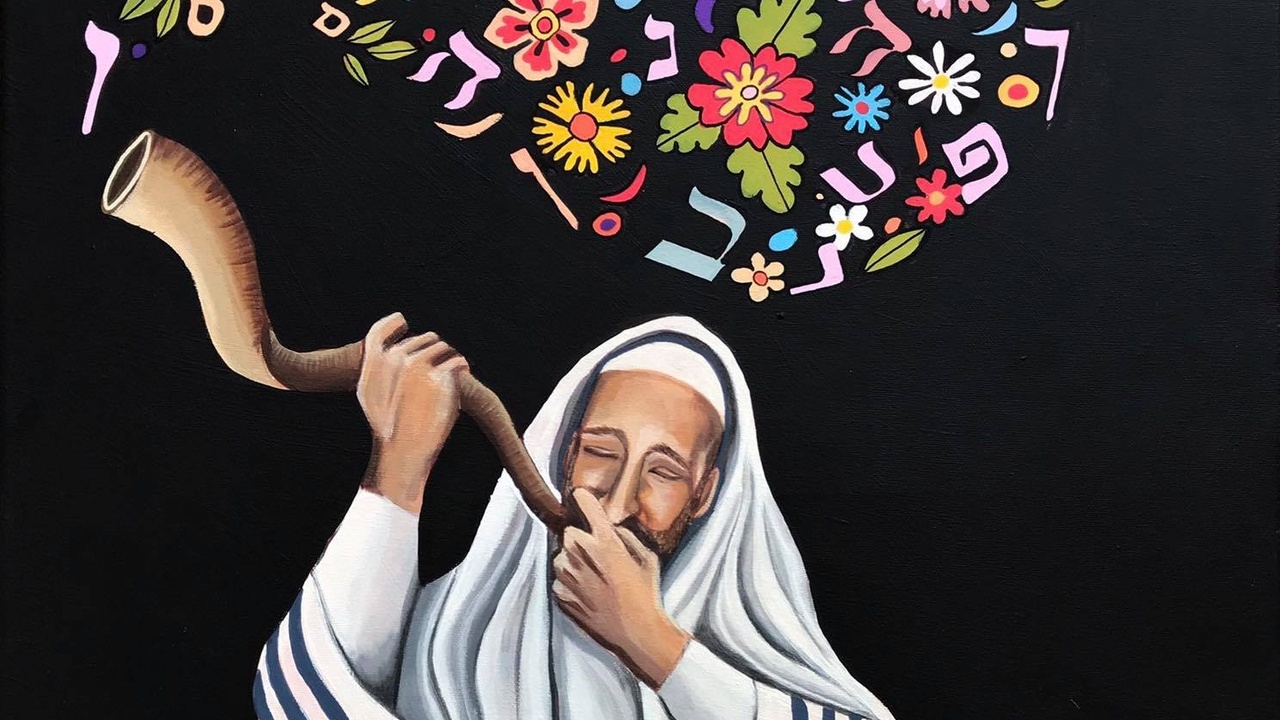 The Kabbalah of Shofar

In this discourse the Alter Rebbe discusses the mystical secrets of the blowing of the Shofar according to the Ba’al Shem Tov. Incredibly deep and enlightening.

As a prelude to understanding the blast of the Shofar, the Alter Rebbe gives 3 parables.

1.Sound and speech/thinking and pre-thinking

The Zohar says the sound is the general over encompassing potential, while speech is the specific intonations of sound. For sound to connect with speech it will always bypass the letter .אלף Aleph

All sounds of speech have the the Aleph (א-Ah,Eh etc) in them. Sound is then divided into their specific (5 forms of ) enunciations.

The Alter Rebbe explains that for every giver (mashpia) to give to a receiver (mekabel) it must have the medium emanated from its lowest self to bind with the highest self of the receiver.

There is also the letter Aleph of the mind which interconnects the revealed mind (meta cortex) with the source of the thought (subconscious mind).

The Alter Rebbe explains that this parable helps us understand the creation and pre-creation process.

The intermediary is the letter Aleph, which connects the source (letter Yud) and Hey with the infinite source.

In a second prelude, the Alter Rebbe explains the Kabbalistic concept of children, or offsprings.

The “parents” in the Kabbalistic sense are referred to Chochma .)״או׳א( and Binah or Aba and Ima

The “offsprings”, are the Middot (זו׳נ). The 7 Middot are comprised of 6 “male-like” Middot (Chesed- Yesod), and one female like Midda (Malchut). The “union” of Aba and Ima is more sublime, while the union of the Middot is grounded and about birthing the finite and material world.

The Alter Rebbe explains the parable as follows:

While an intellectual concept comes from a high source in the mind of the teacher, because of its ability to effect the student, the student is still, never the less not unified with the teacher.

On the other hand, the child may not have the same capacity to intellectually understand and learn as the student can. Never the less he is created from the seed of the father is therefor intrinsically connected to the father by nature of his essential bond which comes from the brain of the father.

Never the less, Kabbalah explains that Angels are formed from the externally of או׳א, and are therefor not

as intrinsically connected to G-D as souls are who are express a deeper bond with the essence of the G-D. This is why man is called Adam from the word resemble (אדמה) the Divine.

With understanding these two parables, we come to understand why Rosh-Hashanah, the birthday of man is celebrated vs the 25th day of Elul, the day of the creation of the world.

On the 25th day of Elul, the world was created, while on Rosh Hashanah, is the birthday of man, the purpose of creation. For man to be born, the essence of the father (G-D) must be drawn down, from his very brain (Chochma-Aba) to descend down to give the seed and birth a child (Middot).

The 6 Midot are the tools of G-D for creation. As the Zohar says “It does not say “6 days G-D created the world”, rather “with 6 days”, meaning with the 6 Midot”.

R ecreation of the world and the Shofar

The world was not created once, rather it is recreated every Rosh Hashanah. Therefor, there must be a new drawing down of a desire called memory (זכרון ליום ראשון) to recreate the worlds again. However, for man (souls) to be recreated requires a deeper eliciting of memory. This is the man aspect of Rosh- Hashanah, the birthday of man.

It is known that the main source of creation is from Malchut as it says “your kingship prevails through all worlds”. In order for Malchut to be rebuilt, it was draw from it’s origin-will or desire. Just like the seed is produced in the brain of the father because of desire or pleasure, so too, for creation to re-occur, there must be a drawing of desire from the source of pleasure in recreating the world.

How is desire elicited? Just as a king is called a king when he rules over separate subjects which are nullified to him, so too, G-D is crowned as king by the nullification of man to him (he is always king, just in the point of actualizing his ultimate will of creation, which is to be known and expressed below by man is where this kingship comes from). When the king feels this nullification, his desire or pleasure to become king is elicited and he is drawn to become king.

This simple desire is elicited by the Shofar. The Shofar’s simple sound expresses the deepest and simplest yearning of the heart to connect to G-D. The reason for this is, that while speech expresses the thoughts of the mind, sound comes from a deeper place of the soul.

The Alter Rebbe explains this with the following parable:

For a worker to feel inspired by his job, he must feel inspired and motivated. So long as he is connected to pleasure in his work , he will be motivated to fulfill his duties willingly and with joy. However, if he is tired, uninspired, or disconnected to the inner mission of his work, he will not be motivated to perform well, and will become disinterested after a short while. The “toil of his hands” is inspired by his emotions.

re-inspired about his work he must connect to the point of pleasure within him.

So too, the creation of the world is recreated every second. Creation is called work as it says “He rested on the 7th day from his work”. For creation to persist, the creator must feel the pleasure in the creative process. In order to illicit this pleasure, we have to re-ignite this at the source, by awakening the simple desire G-D has in the world. We do this through the simple blast of the Shofar. The simple blast of the Shofar awakens the simple pleasure which G-D has with creation and caused him to re-ignite his motivation to recreate the world.

The Alter Rebbe explains that this recreation is done on a deeper internal level with the world, while the “externality” of the material world may exist but will receive from the externality of the Middot (emotion, Z”A). This similar to the worker who may still do his job, albeit begrudgingly.

The Alter Rebbe says that this level is called “dormita” or sleep or slumber.

Just as when one sleeps his organs work, while his mind and emotions are dormant. So too, on Rosh Hashanah the world is in a state of sleep and it is up to us to awaken the desire of G-D to give his inner life force from his internality.

The Arizal explains that this is what happened at the beginning of Genesis, when G-D created Chava (Eve) by cutting one of Adam’s ribs. The Torah says that “G-D brought sleep upon Adam..and took one of his ribs”.

According to Kabbalah, the stories of the Torah are the deepest secrets of creation. In this story, the Torah reveals to us how Adam or Z”A and Chava or Malchut were created in order for them to marry. In other words, for the Middot to unite with Malchut and channel the proper flow of Divinity from above to below.

The Arizal says that the joint ribs of Adam and Chava (“one wall between them”) signifies the joining of Chessed and Gevurah together. This represents the joining of the Gevurah of the giver and the Gevuarah of the receiver. In order to have the proper “chemistry of giver and receiver, their must be the “sweetening” of the Gevurah of the receiver in order to receive from the Chesed of the giver.

The building of Malchut from Gevurah

Kabbalah explains that the “construction” of Malchut is from Gevurah.

For Malchut to be properly constructed, Gevurah must separate from Chesed, in order for Chesed to sweeten and vitalize Gevurah. This is the meaning of the cutting of the rib of Adam to create Chava, allowing the world to receive from a place of Chesed.

This is the inner meaning of the blowing of the Shofar. The Shevarim/Teruah blasts “sweeten” the judgment of Isaac. The sweetening is effected by Jacob’s Tekiyah- mercy, to illicit the kindness- Chessed of Abraham (first Tekiyah) the original state of G-D who “desires kindness”.

Regarding this, the Alter Rebbe asks:
Why then is Gevuarh separated at all, why is Chesed not drawn from it’s source to effect kindness? He answers:

Gevurah means strength. While Gevurah can be detrimental if misused, if properly harnessed Gevurah can yield greater amounts of life-force than even Chesed. Chesed can be perceived as cold for it channels a constant level of kindness, while Gevurah is warm because it draws down a limitless amount of goodness and blessings.

This explains why the blessings of Isaac were the greatest blessings of the Forefathers. “I will make your offsprings many (וארבה) is the numerology of Isaac.

Through the blowing of the Shofar we sweeten the Gevurah of Isaac, thereby utilizing the sweetened Gevurah to give us an abundance of blessings of health, happiness, prosperity and a sweet year.

A PDF from our Master Class Course www.livekabbalah.com